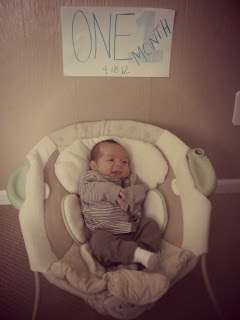 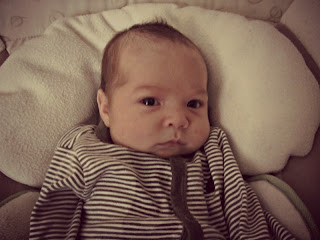 My baby boy, Henry, is 1 month old! I think the more children you have the faster time seems to go. However, with him being my thrid, I'm happy time is going fast. I'm not a huge fan of the newborn stage, never have been.

He doesn't have a set schedule yet. His eating and sleep are still pretty random. They are pretty much 3 hours apart to the minute. He isn't the patient child by any means, there is no working up to crying. It's silent and then instant screaming. When he's hungry, he doesn't mess around. He's also very gassy (much like Ryan was) and spits up at every feeding. I've been good about what foods I eat...even limiting dairy...which is not easy, but it doesn't seem to matter much.

He is a decent sleeper at night, waking up only twice. He likes to be swaddled and enjoys being on his side (thanks to the sleep wedge for keeping him in place!).

He has already smiled a few times...and no I don't count these as "gas smiles". He looks right at me (and Ryan) and we make silly faces and he lights up and smiles back at us.

He is also a cuddler...oh my this kid like to be held. 24/7 if he could. I "wear" him a lot, it's the only way I can get things done around the house! He also likes the sound of the blow dryer and vacuum cleaner...just like his mama...white noise is a must!

He's getting bigger, finally filling out some of the 3 month clothing, but still a bit behind his siblings when they were his age. I'm hoping he'll catch up soon, He lost a lot of weight after he was born, and I understand it will take some time to catch up to where he should be. My milk has finally come in enough to produce what is needed (thank you fenugreek!) so at his next check up in a few weeks hopefully he's getting chunky (I love those chunky babies!).

He's getting better at holding his head up and lifting it when doing tummy time. He's very alert now and awake more during the day. He naps almost the same time as Molly does, obviously I would love eventually for them to be on the same nap schedule, but that will take some time.

Ryan loves him--ok ADORES him. Molly thinks he's cute and tries to calm him down when he's crying by saying "you're alright, you're alright, it's ok, it's ok" but she doesn't kiss or touch him much!

Having 3 kids is much harder than having 2, but we all just love him so much, it really does feel like he's always been apart of our family AND completes are family. I'm excited to continue watching him grow and learn new things!

Happy One Month my Baby Boy! 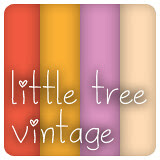 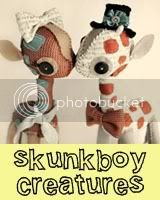 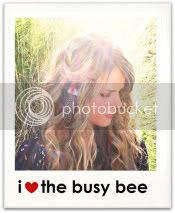 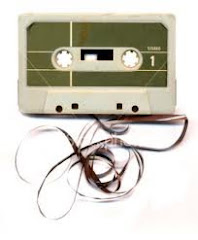